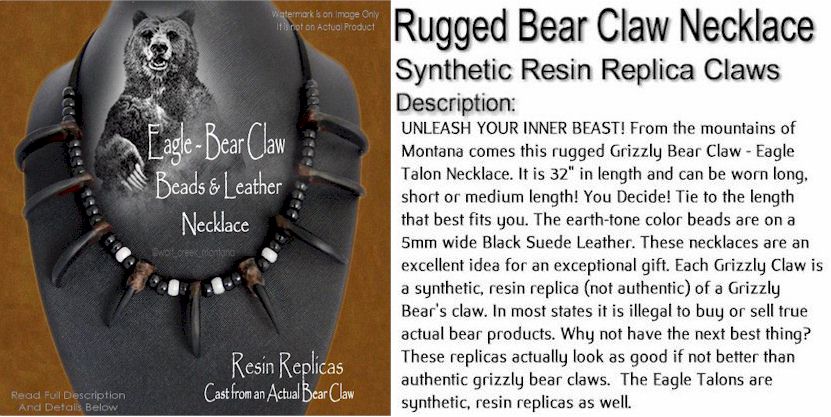 BLACK RAVEN & WHITE BUFFALO ACRYLIC CROW BEADS – From the mountains of Montana comes this rugged Grizzly Bear Claw/Eagle Claw Necklace. It is 32 inches in length! It can be worn long, short or medium length! Tie the necklace to the length that best fits you. Each Grizzly Claw is a synthetic, resin replica (not authentic) of a Grizzly Bear’s claw (approx. 2½”). In most states it is illegal to buy or sell true actual bear products. Why not have the next best thing? These replicas actually look as good if not better than authentic grizzly bear claws.The Eagle Claws are synthetic, resin replicas as well. The earth-tone color beads are hand-strung on 5mm wide Black Suede Leather. These necklaces are a superior conversation piece. They make a fun and exceptional gift, and are the perfect choice for reenactment events such as Mountain Man Rendezvous, Shaman Medicine Man, Renaissance, Medieval or Pow Wow Rendezvous. This Item comes to you in New, Unused Condition ready to wear or give as the perfect gift. ALL of our products come to you in NEW, UNUSED CONDITION.